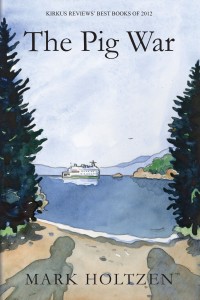 The Pig War : Behind the Scenes

»This book earned a Kirkus Star and was part of their Best Books of 2012 list.

»Whenever I saw a small child wearing a batman cape, wonder woman bracelets, or Spiderman suit for no apparent reason (or an adult for that matter) I smiled. It brought to mind a certain kind of sassy, fun-loving, personality that I admired. That was how Grace was born. Writing The Pig War was basically a way to write about Grace.

» The word “Mobray” was created from two words, a two-letter word and a four-letter word, scrambled together. See if you can figure out where I got the name for the fictional island. _ _ _ _ _ _. (hint: it has to do with an animal in the book)

» Crockpot the dog is based on an old friend’s black Labrador, Jud. If someone sat on the couch he would stare at their feet until they made space for him. There he would crawl up and go to sleep. He also ate his food very fast. I’m not sure if he smelled. I’ll have to ask.

» Grandad is loosely based on my own Grandad. My sister and I would play marbles with him whenever we stayed at he and my Grammie’s house. He said “Yowzer” a lot, roasted walnuts by the woodstove, and liked to show me that his two-bit axe was sharp enough to cut paper. Grammie was the only adult around who would serve us sugarcoated cereal. (Thanks, Grammie)

» My friend Elisha Cooper painted the cover for the book. There is a hidden image on the cover. Have you found it?

» Jesse Link, a local Seattle artist, painted another cover image for me that I considered using. I still love the image but my market research (i.e. a fellow teacher asking fifth graders in a blind study) showed they thought it looked more like a picture book cover. You can download it here in the form of a cool bookmark and be sure to check out Jesse’s other great artwork at http://jesselink.com/.

Buy The Pig War at the following retailers: